Tiger’s running back Brian Scott ran for 124 yards and three scores on only seven carries. Scott also recovered a fumble on the first play of the game.  Scott averaged 17.7 yards per carry. 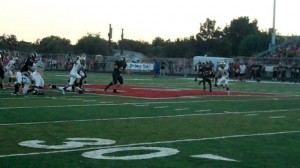 From the start of the game every one knew the Tigers were in control. After the Warriors fumbled on the first play it only took the Tigers two plays to punch it in and make it 7-0.

The second Warrior drive was a three-and-out gaining only two yards. It wasn’t long before Brian Scott scampered up the middle shedding tacklers left and right on his way to a 46-yard touchdown run.

After forcing another three-and-out the Tigers marched right back down the field and scored on a Cameron Hatanaka 12 yard run.

The Tigers scored on their first four positions of the quarter and led after the first quarter 28-0.

The Tiger defense was fantastic only giving up 195 yards; more then half of them came in the second half. Weston Yardley and Zach Prince each had an interception and Bryan Lee had one sack to go along with six tackles.

Coach Homer said, “I was very impressed with the way we came out tonight. It’s always nice to come out of the gate firing and we did that. I got to rest some key guys late and that will help with Pine View coming in here next week looking for their first Region win.”

The Tigers added two more in the second quarter to make the score 42-0 at the half. Quarterback Taylor Parker and running back Adam Thompson each scored on runs over 26 yards.

Snow Canyon like Hurricane pulled most of its starters in the fourth quarter. The Warriors did get on the board on a five-yard run by Corbin Moffitt with 3:14 remaining in the game.

Looking ahead to next week, the Snow Canyon Warriors will host Cedar Red’s and the Hurricane Tigers host the Pine View Panthers. Both games set to kick at 7pm.