SONGDO, SOUTH KOREA – Golfer Jay Don Blake shot a final round 68 to get himself into a four way playoff for the Songdo IBD Championship. Blake outlasted some of the biggest names on the Champions Tour to claim his first Champions Tour title ending a 20-year winless drought. 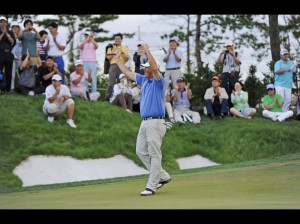 Blake started the day one shot back of then leader Michael Allen. After six straight pars, Blake found himself two back of John Cook. Cook made back-to-back birdies on the 3rd and 4th hole to get to -11, two clear of Blake and David Peoples.

Blake got into red numbers for the round with a birdie on the par-5 seventh hole to cut Cook’s lead to one, but a bogey on the very next hole put Blake back to even for the round and tied for fourth.

Blake shot a front nine 36, even par; he still trailed Cook by two but Peter Senior was on a roll, birding three straight holes to get to -10. Senior was five groups ahead of the last group and knew he had to post a low number to have a chance.

After three straight pars to start the back nine, Blake knew he had to start being more aggressive. Blake saw the leaders making their move and knew birdies were out there. Senior ended up taking a one shot lead at -13 after birding seven of his last nine holes, the last coming on the 16th.

Blake got to the par-3, 13th hole where he made birdie. On the very next hole, Blake had another birdie putt to get to -11 and just two back. The putt dropped and Blake was just two back of Senior.

Blake, on the other hand, was coming off of back-to-back birdies and was on the tee at the par-5, 15th hole trailing by 2. After three solid shots, Blake had a birdie putt to get to -12 and one back of Senior. Like the two holes before, Blake sunk another birdie putt and was now trailing by only one and tied with Cook and former Masters and British Open Champion Mark O’Meara at -12.

O’Meara, playing one group in front of Blake and Cook, made a birdie on the par-3, 17th hole, to tie Senior at -13 with a par-5 finishing hole ahead.

Just after O’Meara made his birdie, Cook knocked in a birdie putt of his own to also tie Senior at -13. Blake had a 30 foot birdie putt on the 16th hole for four birdies in a row, but the putt had a little too much speed and hit the back of the hole and popped out.

With Senior in the clubhouse eating some lunch, O’Meara on the par 5 one hole ahead, and Blake and Cook on one of the hardest holes on the course, Blake was going to have to hit an amazing shot to have a chance to win. Cook, who was tied for the lead, hit the green but was over 50 feet away. Blake hit that amazing shot landing it just over the bunker and had a 12-foot putt to tie for the lead. Cook almost made his birdie putt but tapped in for par. Blake trailing by one was looking to make his fourth birdie in 5 holes.

Blake made the birdie and once again had the honors on the tee. Tied for the lead, Blake’s drive went through the fairway and landed in the rough. Cook hit his drive into the fairway but, with the wind picking up, could not go for the green in two.

Up ahead, O’Meara had a left to right breaking putt from about 25 feet to get to -14 and eliminate Senior and force Blake and Cook to make birdies. O’Meara missed the putt blowing it 3 feet bye, O’Meara made the par putt and joined Senior on the practice chipping area to stay lose.

Both Blake and Cook had to layup. After the two approach shots, Cook hit his putt first; his putt just missed and Cook tapped in and was the third player in the clubhouse at -13. Blake had almost the exact same putt as O’Meara had had one group ahead of him. Blake’s 25-foot birdie putt broke hard from right to left just burning the edge and stopping a foot past the hole. Blake would tap in setting up the four man playoff.

After signing their score cards Blake and Cook joined O’Meara and Senior on the 18th tee. After drawing numbers to decide the order the players would hit, it was time to start.

Blake was first off the tee and again hit his tee shot thru the fairway, O’Meara and Cook would also miss the fairway. Senior was the only one who found the fairway off the tee. After all the players hit layup shots it came down to a chipping contest.  Blake was closest to the hole and would putt last.

Cook, O’Meara, and Senior missed their putts. Blake had a 12-foot putt for the win. The 12-foot uphill putt broke a little from left to right. Could this be the end of the drought? No! Blake missed the putt to the left and tapped in for par. 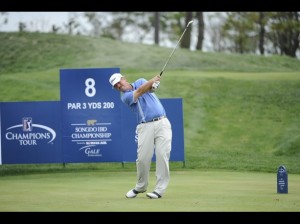 The second playoff hole started just like the first playoff hole, three balls were in the rough and Senior was in the fairway. Again, all the players had to layup. Senior’s second shot was way right and hit his approach shot into the rough right next to the greenside bunker. O’Meara’s approach shot was 25 feet away on the same line he had in regulation and Cook was about 10 feet away from the hole but was above the hole and had a very fast, slippery putt. Blake’s approach shot came up way short and left him with a 60-footer for birdie.

Senior was first to play, Senior’s chip shot came out perfect landing just short of the hole and rolled past – maybe two feet. Senior tapped in for par. Blake was next, his putt was on the same line as O’Meara’s putt so once Blake hit it Mark O’Meara moved in close to try and see the line. The putt came up just four feet short and Blake would have that knee knocker if the other players missed their birdie putts. O’Meara and Cook both missed and left Blake on the green to try and save par and go on to the next hole. Blake, who looked and seemed calm all day, made the tough putt and all four golfers moved to the next hole.

They went to the 3rd playoff hole; this time it was the most difficult hole on the course, the par-4, 10th. Blake was the only player to hit the fairway. O’Meara and Senior both missed the green and were above the hole. The story of the 10th was Cook who hit his approach shot out of the fairway bunker to eight feet. Blake’s approach shot came up about 25 feet short of the pin, but on the green.

Senior elected to putt from the rough because of the downhill slope, and even though he barely hit the ball, it still went four feet past the hole. O’Meara was next, his chip shot landed just on the green and ran three feet by the hole. Then Blake was up, his putt ended up just short of the hole and tapped in for par. That set up Cook with an 8-foot downhill birdie putt to clinch the Championship. Cook was looking for his fourth win of the season. Cook’s putt broke to the right and just missed the hole; Cook, like Blake, tapped in for par.

Senior and O’Meara were almost on the same line; Senior’s 4-foot uphill putt was first. Senior’s putt lipped out and he was eliminated.  O’Meara’s putt also missed and we were down to two players.

Blake lost to Cook earlier in the year at the Outback Pro-Am in Tampa, Florida. Cook won on the first playoff hole, oddly enough it was a par-5.

The two golfers rode back to the par-5, 18th hole, and Blake again hit first. This time Blake’s drive landed in the fairway, but again the wind was too strong into his face so he could not go for it. Cook’s drive also landed in the fairway and Cook tried to play a little mind game with Blake by grabbing an iron out of his bag as Blake went first.

Blake’s layup shot was right where his previous three layup shots were, about 110 yards from the hole. Then the trickery started: Cook put the iron back in the bag after Blake hit and pulled out his 3 wood. His second shot landed just short of the green, about 40 yards from the hole. Blake’s third shot was a beauty, landing above the hole about 13 feet away. Cook’s chip was also very good, landing just 11 feet short of the hole.

Now it’s down to a putting contest. Blake was first; his putt never had a chance, missing a foot left of the hole. Again, Cook had a putt to win. Cook’s putt lipped out and we were off to the 5th playoff hole. 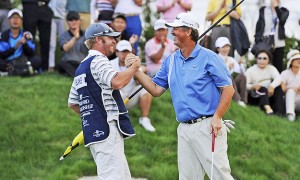 Both players hit the fairway on the par-4, 10th hole and Blake was first to play. Blake’s shot landed just past the hole and rolled back to seven feet. Cook went second because he was two yards closer to the hole, Cook knew he had to hit it close but his wedge-shot drifted right and left him 25+ feet away.

Cook hit a great putt but it popped out, leaving Blake a short putt for the win.

Blake had a seven foot downhill putt for the first win in over 20 years. Blake’s putt went in and ended a streak of 42 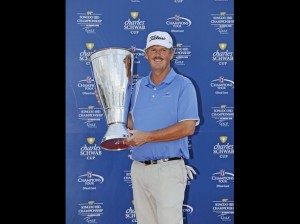 4 straight starts without a win. Blake’s last win was at the Shearson Lehman Brothers Open in San Diego in 1991.

Blake moved up to 10th on the money list and is now fully exempt for the first time in his Champions Tour Career. He also earns a two-year exemption into the Champions Tour season-opening Mitsubishi Electric Championship in Hawaii.

City of St. George to reopen golf courses — with some extra precautions in place