SONGDO, SOUTH KOREA – Golfer Jay Don Blake shot a second round 67 (-5) to bring him to -9 for the tournament, one back of leader Michael Allen (-10). Blake, a lifelong native of St. George, Utah, is playing in this week’s Champions Tour Songdo IBD Championship.

Blake was tied for fifth after the first round at -4, trailing the leaders by two. 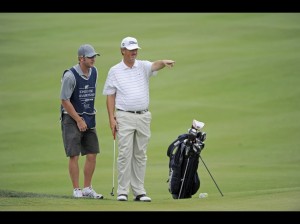 After an even par front nine, Blake birded three straight holes starting at the 10th. After two more pars Blake made another birdie on the par-5 15th hole. Blake finished his round with a birdie on the 18th hole bringing him to -9 for the championship.

Blake is tied with John Cook  (-9) who beat him in a one-hole playoff earlier this season at the Outback Pro-Am in Tampa, FL.

Former Masters and British Open Champion Mark O’Meara is two shots back at -8.

Defending Charles Schwab Cup Champion and past Masters Champion Bernhard Langer is three back along with current points leader Tom Lehman at -7.

In all there are ten players within four shots.

The Songdo IBD Championship has the largest total purse and is worth 456 Charles Schwab Cup points to the winner.

You can cheer on our local sports star tonight on the Golf Channel at 11p.m.

City of St. George to reopen golf courses — with some extra precautions in place