ST. GEORGE – Beginning Oct. 7, the St. George Wagon Company will be leaving Parowan and embarking on an eight day journey through southern Utah in commemoration of  the 150 year anniversary of the City of St. George.

“One hundred and fifty years is quite the celebration,” said Mayor Dan McArthur.

The St. George Wagon Company will be paying homage to the original 309 families sent by the Church of Jesus Christ of Latter-day Saints to the St. George Valley in 1861 to found the Dixie Cotton Mission. According to the Mayor, people who register for the event will have the opportunity to experience and share how the pioneers lived.

“We learn a lot when we look to the past,” McArthur said.

“It’s not just about St. George, [the St. George Wagon Company] celebrates every community we pass through,” said Marc Mortensen, the Support Services Manager for the City of St. George.

Indeed, a variety of related activities and events will take place in each location the wagon company visits. Parowan, once called the “Mother City of Southern Utah,” acted as a layover stop where pioneers could find some respite and resupply before continuing on their way. The wagon company will start from Parowan on Oct. 7, and then reach Enoch/Cedar Valley the next day. Mortensen said that there will be no traveling on Sunday, October 9, but the company will get under way the following day.

It has also been confirmed that while in Enoch, Elder Steven Snow, a member of the Presidency of the Seventy in the LDS Church, will be speaking to the wagon company. Elder Snow is the great grandson of Erastus Snow, the leader of the initial migration to the St. George Valley. 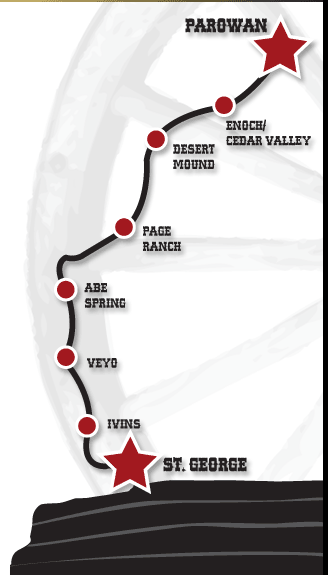 McArthur will also be participating in the wagon company, and humorously added that he’s even growing a beard for the event. Be it by wagon, pulling a handcart, or simply walking, the mayor intends to see the entire event through from beginning to the end.

The grand finale of the St. George Wagon Company will be the Dixie Legacy Celebration held in Vernon Worthen Park. Included in the event will be a parade featuring the wagon company, as well as descendants of the original 309 families that settled the St. George Valley. Pioneer themed games and dancing will be held throughout the day. A fireworks show will bring the day’s celebrations to a memorable close.

“Heritage is important,” McArthur said, “Our ancestors set the pace for what we have now.”

The Mayor related that he hopes to stress the importance of learning from the past and impressing on people today that, while the pioneers didn’t have it easy, they looked to the future with optimism. Spurred on by passion and faith, the early settlers came to a dry and inhospitable climate that has since become one of the crossroads of the American Southwest thanks to a never ending supply of hard work and determination that has sustained St. George for the last 150 years.

McArthur also stated that there is a special feeling to St. George, a feeling he called “the Dixie Spirit.” It is a feeling unique to Utah’s Dixie, yet seems to be felt by anyone, from the solitary visitor passing through to the lifelong resident of the red rock landscape. It is a feeling owed to the 309 families that came to St. George and provided succeeding generations with a foundation to build upon.

Now individuals have the chance to renew that Dixie Spirit all over again through the St. George Wagon Company and catch the vision of the original Dixie Cotton Mission.

Registration for participants and event sponsors is currently taking place, but will end on Sept. 9. Additional information on activities, pricing, and rules can be found on the City of St. George Website.