Washington won the State Championship in July to earn their bid into the Western Regional Tournament. | Photos by Chris McArthur 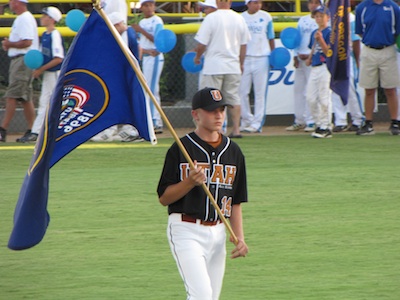 WASHINGTON CITY – The Washington City All-Star Team is in an incredible position to become the first Utah team to ever earn a bid to the Little League World Series. Washington won the State Championship in July to earn their bid into the Western Regional Tournament.

Utah-Washington has a record of 2-2 after pool play, securing them the 4th seed in the Western Region Semi-Finals where they will play Southern California on Friday, August 12,in the second of the two games.

According to ESPN’s website, the semi-finals will be broadcast on ESPN 2 with the first game starting at 5 p.m. Eastern, 3 p.m. locally. The second game will start at 11 p.m. ET, 9 p.m. locally. The winners of these two games will face each other in the Western Regional Final which will be broadcast on ESPN with the winner earning a bid to the Little League World Series.

About his team’s success, coach Mark Sampson said, “What’s so amazing about it is the demographics.  Here in Utah we don’t have very many people. Usually the Utah team comes to the Region tournament and looses 4 games and goes home.”

Last year in the Region tournament, the team went 1-3 in pool play and returned home. Only one player, Marc McArthur, returns from last year’s team.

“People root for us as the underdogs,” said Sampson, “and we like it!”

Utah-Washington has beaten Hawaii, who won the Western Regional last year, 5-3 and Arizona 5-2.  If they can win these next 2 games, they will be the first Utah team ever to earn a trip to the Little League World Series.

Talking about the upcoming game against Southern California, who they haven’t faced yet but was undefeated in pool play, Coach Sampson told St. George News, “We feel we can actually beat them.”

He said that playing the No. 1 seeded team first is to his team’s advantage because it allows him to use his pitching Ace, left handed Seth Corry, in the first round to help keep them alive in the tournament, while it’s likely that Southern California will save their best pitcher for the championship game.

Leo Wright, along with his wife and two kids, have lived in Southern Utah since 2010. After graduating from the College of Eastern Utah, he moved to Cedar City where he earned a degree in Integrated Engineering from Southern Utah University. He is now working as a mechanical engineer for Reid-Ashman Manufacturing. Leo and his older brother recently began developing www.askthewrightbros.com which is a website where they help people determine which electronic devices best suit their needs and budget.