A home in Toquerville is destroyed in a fire that may have started as a brush fire. | Photos by Jen Watkins, St. George News 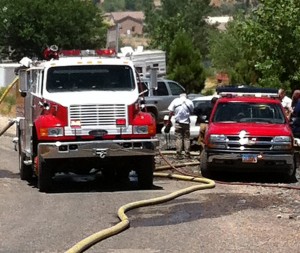 TOQUERVILLE – Firefighters are investigating what is reported to have started as a brush fire that quickly destroyed three homes in Toquerville today.

David Pope, City Emergency Manager for Toquerville, said he saw the smoke around 11:45 a.m. He quickly raced up the hill to evacuate the residents, but they weren’t leaving.

Pope said the residents stayed to fight the fire with hoses until firefighters arrived. There were no reported injuries and Robert Tersigni with the Washington County Sheriff’s Office said no pets were reported missing as of 2 p.m.

As of 2 p.m., firefighters were still in the area putting out the hotspots and hoping the wind didn’t pick up and carry the blaze further.

Tersigni said it took approximately an hour-and-a-half to contain the fire. He said three homes were damaged and firefighters were trying to keep the fire from a fourth home. Two of the homes were completely gutted, he said. 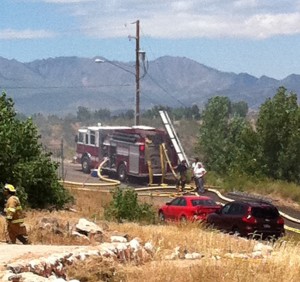 Pope said one of the homes was vacant and may have been bank-owned property. Pope said the city had organized the Red Cross to assist the families that would be displaced from the fire.

Tersigni said firefighters from Hurricane, Colorado City, Washington City and Washington County assisted in suppressing the fire and investigating the cause, which is still currently under investigation.

Rewards offered for information about deer, elk left to waste in Beaver County

Rewards offered for information about deer, elk left to waste in Beaver County