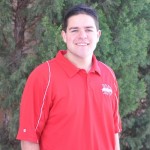 ST. GEORGE – Dixie State College of Utah has announced who will represent its graduating class of 2011 as valedictorians and associate degree high honor students at the College’s Centennial Commencement Exercises on Friday, May 6, at the Avenna Center Burns Arena.

Sabrina Hansen and her family moved from Italy to St. George so she could attend Tuacahn High School prior to her freshman year. During her high school years she participated in countless theatrical productions in the southwest region.  In addition, during her senior year she was student body president and valedictorian.

Hansen decided to attend Dixie State College because of her love for the area and the individualized education that DSC offers. Her passion and enthusiasm for higher education lead her to participate in DSC’s Ambassador Program, which showcases the educational opportunities available for prospective students. She also met her husband, Tarik, at DSC and the couple was married in 2009.

A native of Logandale, Nev., Oglesby is a communication major and a budding sports broadcaster. He spent the past year as the television voice of Dixie State Red Storm athletics, providing play-by-play for DSC football, men’s and women’s basketball, baseball and softball. Oglesby also broadcast the DSC women’s basketball program’s first-ever NCAA Tournament game this past March.

When not wearing a headset or in class, Oglesby enjoys serving DSC in its Ambassador Program, in which he helps hundreds of prospective high school students make decisions each year about their educational futures. He also enjoys spreading the great stories and news about DSC to people everywhere. He is the son of Keith and Debbie Oglesby.

The Valedictorian and associate degree high honors awards are judged not only upon grades, but difficulty of courses completed. Each recipient must have a cumulative GPA of 3.90 to 4.00.

Dixie State’s Centennial Commencement Exercises will begin at 2 p.m., with Thomas S. Monson, President of The Church of Jesus Christ of Latter-day Saints, serving as commencement speaker. Graduates will march from DSC’s Eccles Fine Arts Center down the palm-lined walkway to the Burns Arena beginning at 1:20 p.m.

This year’s Centennial Commencement ceremony will be a ticketed event. Each graduate who plans to attend the ceremony will receive two free tickets for family and friends for seating at the Burns Arena, which has a seating capacity of nearly 4,100 patrons when set up for commencement. Those patrons include graduates, DSC faculty and staff, dignitaries, platform guests and spectators.

DSC officials have also set aside 700 “obstructed view” seats and will make those free tickets available on a first-come, first-served basis prior to the ceremony in a line-up area located at the Avenna Center Plaza. Ticketed guests to DSC’s Centennial Commencement ceremony are asked to be seated by 1:50 p.m. (10 minutes before the start of the ceremony), in order to serve patrons wishing to secure a restricted-view seat.

In an effort to accommodate all visitors to the campus that day, Dixie State officials have set up  overflow venues at the Avenna Center Cox Auditorium and at the Eccles Fine Arts Center Main Stage Theater. All overflow areas will provide a live television feed of the ceremony on a projection screen. Seating in the overflow venues will be available on a first-come, first-served basis and no ticket is required.

In addition, the ceremony will be available via free live streaming video on DSC’s website and broadcast live on Dixie’s Community Education Channel (CEC). The ceremony will also be shown on a taped-delay basis on CEC throughout the month of May and on KUEN-TV on Saturday, May 14th, at 7:30 p.m.

Following the Centennial Commencement ceremony, DSC will host six individual college convocations, where graduates will be individually recognized and awarded their diplomas. There are no seating restrictions at these convocations and seating will be available on a first-come, first-served basis.

The annual President’s Reception and Graduate Luncheon will be held earlier that day from 11:30 a.m. to 12:45 p.m., in the DSC Gardner Center Ballroom. The luncheon is free to graduates, while extra tickets may be purchased for $11.50 for adults and $7 for children age 12-under.

Giving Tuesday, and beyond, crucial as pandemic constricts cash flow and limits volunteers

California monolith pops up after finds in Utah, Romania