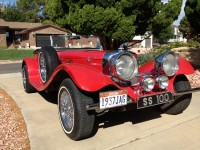 Please note that this calculator is for estimating purposes only and does not represent an offer. The default interest rate is for informational purposes and is not necessarily the rate offered by the dealer or financial institution.

1937 Jaguar SS100 Replicar
The actual 1937 Jaguar SS100 was a British 2 -seat sports car built by SS Cars Ltd of Coventry, England. The SS100 was so named as the reflected the capability of the vehicle to exceed 100 mph – then a remarkable speed for a production vehicle (Even the replicar has racing windscreens behind the windshield which folds forward.) The replicar is built on a Ford chassis and has a Ford 2.8 liter V6.
The gauges are VDO as shown in the photo. Racing style seat belts. Racing style rear view mirrors. The steering wheel on the replicar is on the left. The replicar is a product of Antique and Classic Automotive, Inc. of Buffalo, New York.
An original photo advertisement for the replicar kit is included in the sale. The replicar has 1,353 miles on it since it was completed. The transmission is a Ford automatic. The engine and transmission are sound.
Vehicle is located in St George, UT.